“Is your city on the List or close by?”

Tell your friends and neighbors; #TheHillPeople already know; Be sure to read the notes and sources also, as you look at the EPA stats. Take all possible precautions. #DodgeTheRads 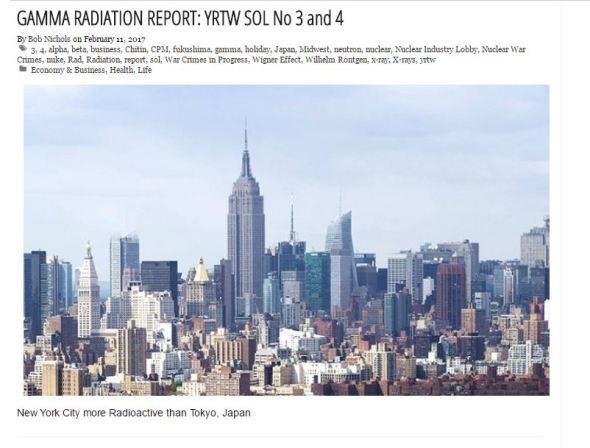 “(February 11, 2017) – Good Day, this is “Your Radiation This Week” for the past 2 weeks. These are the Recorded Total Gamma Radiation Highs that affected people around the United States. YRTW is published every two weeks on Saturday. The next publication dates are February 25 and March 11, 2017….

“…San Diego, on the West Coast of America, far exceeds both beleaguered cities in the deadly radiation sweepstakes. The Race for the Rad is deadly precisely because there are no winners in this contest; only death and disillusionment….”

Radiation knocks out your Immunities

Everywhere we look – worldwide – old and new diseases are on the march. In its most basic kill attribute Ionizing Radiation is an all out attack on our Immune systems. As the immunities of the whole planet are taken down a notch, new and old diseases come roaring to life.

Oddly, it is not that the diseases are anything especially new or unusual. It is the Immunities of the human, animal and plant hosts that are destroyed and diseases rush in to feed on the newly unprotected food sources. The human, plant and Animal Hosts are changed, degraded by the Rad; not the diseases, yet.

It is very likely that the new and old or mutated diseases will last much longer that the newly susceptible hosts – including humans. Here’s the big picture from Eco-Health Alliance on killer viruses:

“Have a wonderful radioactive weekend and remember to Dodge the Rads, it’s dangerous out there.”

Copyright by Bob Nichols @ 2017: Reproduce and distribute. Give full attribution to Bob Nichols at duweapons@gmail.com

This is a public service message brought to you and your by Lucy Occupy and Friends, in compliance with copyright permissions.  Continue to Dodge The Rads and remember remember…. WE ARE THE MEDIA NOW NOW.