TOTAL GAMMA RADIATION IN YOUR RADIATION THIS WEEK

MORE ON FUKUSHIMA SINCE MARCH 2011

In a short time a dose of 1 Sv causes acute radiation sickness, and a dose of 10 Sv is fatal.” Short and to the point, the Sievert measurement informs all residents of imminent danger. Very democratic, that.

SUMMARY BY LUCY OCCUPY & FRIENDS Below

FACING A DYING NATION – MOST RADIOACTIVE CITIES ACROSS AMERICA 3/25/17 BOB NICHOLS, “TOTAL GAMMA RADIATION IN YOUR RADIATION THIS WEEK NO 9 AND 10”

“TOTAL GAMMA RADIATION in Your Radiation This Week No 9 and 10” by Bob Nichols clearly advises of and warns about Radiation levels across the United States of America. This report’s calculations are based on radiation charts and graphs of the EPA in CPM and Sievert measurements and by the EPA based reporting of NETC, an LLC. Readers gain the benefit of Nichols’ years of reporting on nuclear disasters around the world.

The radiation levels in the USA have reached alarming and dangerous levels, and corporate media, the EPA and the White House continue to remain aloof.

It is inconvenient to ‘take precautions’ recommended, and the dying majority of Americans would apparently prefer not to deal with the harsh nuclear realities. They instead subscribe to the Japanese hokum that “smiling people do not get radiation poisoning” as a sole precaution.

This article applauds the Super Lawyer and the legal team in the recent lawsuit win against Tokyo Electric Power Company [TEPCO] and the Japanese government for liability in the Fukushima nuclear disaster.

Nichols refers to the radiation levels across the USA with the acronym ELE, which stands for Extinction Level Event and states, “I believe the amount of Rad in the air Now Dooms Humanity to a quick extinction. I can’t say it any plainer than that.”

Who benefits by the EPA refusal to report the gamma radiation levels across the USA? While the current EPA is facing budgetary cutbacks and approximately 3,000 job losses, it is clear that ‘somebody isn’t doing their job.’ Those who benefit are the nuclear lobbies and their clients, and their leased/owned bureaucrats and politicians. Who loses? Humanity.

Corporate media has also remained aloof on the subject matter of domestic radiation poisoning, although the Your Radiation This Week series is widely shared electronically around the world, and redistributed in various online publications, in whole and in part with links back to the original site, or plagiarized without references and attributions.

Nichols assiduously reminds his readers to take precautions because “Although we can’t see it, taste it, smell it or hear it we can measure radiation and observe its effects. One way to measure radiation which the United States Environmental Protection Agency [EPA] has chosen to use on its radiation websites is in Counts Per Minute or CPM. Each Count is One Radioactive Decay.” Quote from ‘Your Radiation This Week’ Apr 3, 2015.

While many of the anti-nuclear and fake-anti-nuclear articles will discuss merely cesium, or strontium or plutonium, they generally omit the fact that ‘All Nuclear Reactors Leak All Of The Time, Some More than Others – on purpose’ and that there are 1,946 known lethal isotopes. Nichols starts many of his articles with this statement:

“Notice: It is necessary for public health and because the many nuclear reactors are venting radioactive gases and steam at nights and on weekends that all residents must stay inside at nights and on weekends. Especially hard hit are the cities listed in YRTW ELE. See the latest Your Radiation This Week for the most recent list of contaminated cities. – Bob Nichols”

Nichols closes each of his reports with the following statement:

“Have a wonderful radioactive weekend and remember to Dodge the Rads, it’s dangerous out there.”

REFERENCES: Bob Nichols, “TOTAL GAMMA RADIATION in Your Radiation This Week No 9 and 10” Veterans Today, March 25, 2017. http://www.veteranstoday.com/2017/03/25/total-gammaradiation-in-your-radiation-this-week-no-9-and-10/ including notes and resources.

Via:  Researchers and Friends of Humanity:   Lucy Occupy & Friends

YOUR RADIATION THIS WEEK

MORE ON FUKUSHIMA SINCE MARCH 2011

WHAT ARE EFFORTS TO CONTAIN FUKUSHIMA? NONE.

EVACUATE TOKYO AND ALL US FORCES FROM JAPAN

JAPAN: THE SOLUTION TO THE BLOWN REACTORS

FUKUSHIMA: A RIVER RUNS THROUGH IT

FUKUSHIMA: HOW MANY CHERNOBYLS IS IT?

HIROSHIMA TO FUKUSHIMA, FINISHING THE JOB

VETERANS TODAY EXCLUSIVE: WHAT TO DO ABOUT THE RADIOACTIVE POISON

NUCLEAR WEAPONS! OHMYGAWD THEY DID IT!

I SPIT ON YOUR GRAVE

ALL NUCLEAR REACTORS LEAK ALL OF THE TIME

BOB NICHOLS SAID WHAT ELSE? 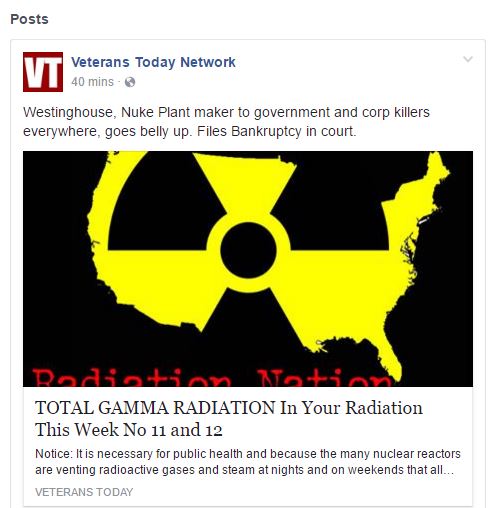 ““Have a wonderful radioactive weekend and remember to Dodge the Rads, it’s dangerous out there.” – Bob Nichols

Bob Nichols Said WHAT Else About Your Radiation This Week !?!  Since WHEN?!?

TOTAL GAMMA RADIATION in Your Radiation This Week – So What? Here’s What!