MILLION A WEEK CLUB – Your Rad this Week in the US 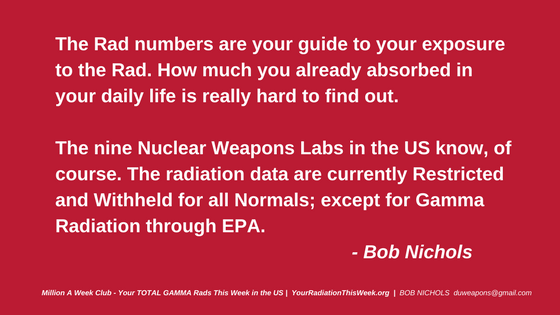 Are you in a city that gets a Million Counts of Radiation a Week? First, how on earth are you going to find out? Folks, that is a secret, isn’t it?

Look no further, Bob Nichols is the only Writer in the world that has the info for you. This is a Bad situation for all exposed to the Rad.

[See the sortable Table of Poisoned American Cities at the Bob Nichols VT column today, including the #DailyRadUpdate video and text- #1 US City Report Daily Update]

NUMBER OF MILLION COUNTS A WEEK CITIES ZOOM IN THE US 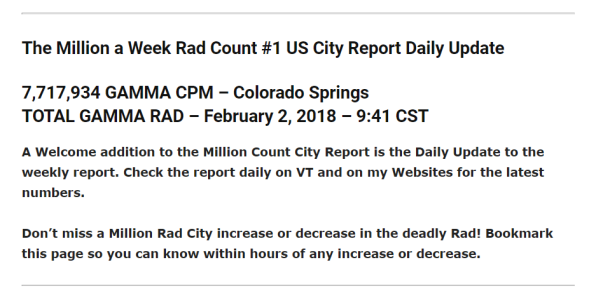 This is a public service message brought to you and yours by Lucy Occupy and Friends.  Here’s a sad commentary from Facebook… Land of Trolls and Thugs…..not the smartest place on earth…

“…but I don’t understand. the Nichols update says “The amount of RAD in the air NOW dooms humanity to a relatively quick extinction”. So then, who gives a fu**?…”

Here, try watching the video, it might help with cognition — and might help with the confusion that comes from swallowing too much fake-anti-nuker propaganda…. It’s sad to see posts like that, isn’t it?

“The amount of Rad in the air now Dooms Humanity to a relatively quick Extinction. Have a wonderful radioactive weekend and remember to Dodge the Rads, it’s dangerous out there.”   Bob Nichols

There is also a severe censorship problem on social media.

READ THE ENTIRE ARTICLE HERE…. AND SHARE IT EVERYWHERE!