Are you in a city that gets a Million Counts of Radiation a Week? First, how on earth are you going to find out? Folks, that is a secret, isn’t it?

Look no further, Bob Nichols is the only Writer in the world that has the info for you. This is a Bad situation for all exposed to the Rad. This is the Final Gamma Rad Count for 2017…

Million a Week Club is a new publication by Bob Nichols in VT. Check out, at a glance, which cities in the USA are running a Million Rads a Week in Gamma.

This is for the 52nd week Plus One Day of the Rad Count for 2017. Read it and weep. It is a done deal and cannot be changed.

To be eligible a city must sport a Gamma Radiation of at least a Million Gamma Rads a Week. It is NOT a good club to be in. There is no prize, only death, disease and chaos….” – Bob Nichols

[Everybody must do their shares to #OccupyVirtually because We Are The Media Now Says LucyOccupy.com & Friends ] 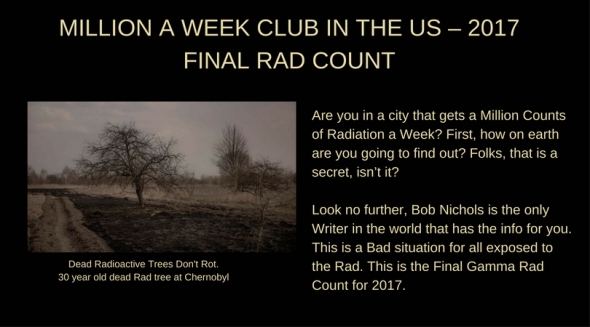